Stand up! My conversion to a standing desk.

I’ve been meaning to write this post for a while now, but I just haven’t had much time to sit down…I mean stand up…and write it. Making the switch to a standing desk has been one of the best things I’ve done for my career in terms of how I feel while I’m working and at the end of the day.

What prompted switching to a standing desk

Ever since I finished up my one-year web development program in 2003, I’ve been sitting down all day long. Prior to that I had been working in a cabinet shop while attending school and much of my day was spent standing up. At the time I would dream about how great it would be once I was able to sit behind a desk instead of be on my feet all day.

But after 10+ years of sitting all day, I’ve realized it’s not all that great. By the afternoon I’m sleepy. I’ve put on weight. When I get home at the end of the day I’m super tired and I haven’t even done anything. Meanwhile, my 64-year old father who still runs his own landscaping business has way more energy than me, even after days spent out in the heat doing hard labor.

With all of the recent statistics about how sitting all day (whether we exercise or not) is essentially killing us, and after hearing first-hand testimonials from many peers who have made the switch, this past May I decided it was time for me to give it a try.

I wasn’t sure if I would like standing all day, so I started simple. My desk is fairly minimalistic: a basic flat top with no drawers. I figured out how high I would need to raise it to make it work for standing which was 16″. I headed to WalMart and found a pair of rubbermaid containers that that height exactly. Propping each one beneath a leg of the desk, I was able to create a makeshift standing desk. 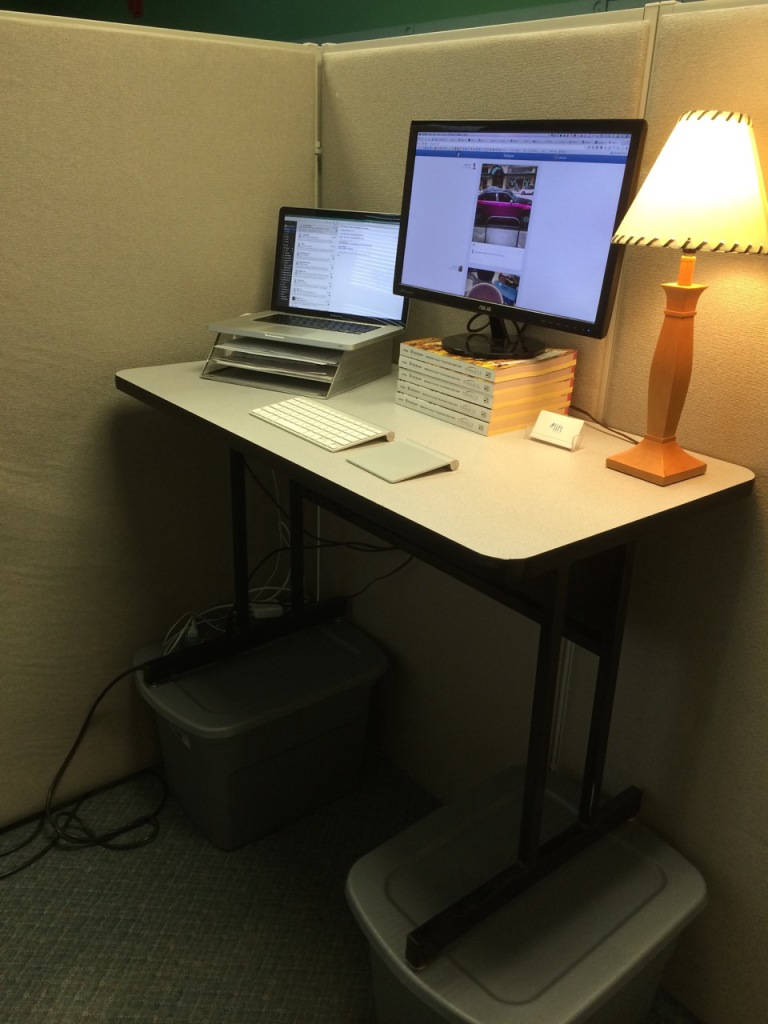 My monitor also needed to be raised, so I took a bunch of phonebooks (finally, a use for those things!) and placed them underneath the monitor base. It kind of looks ridiculous, but it’s actually worked really well. Check it out: 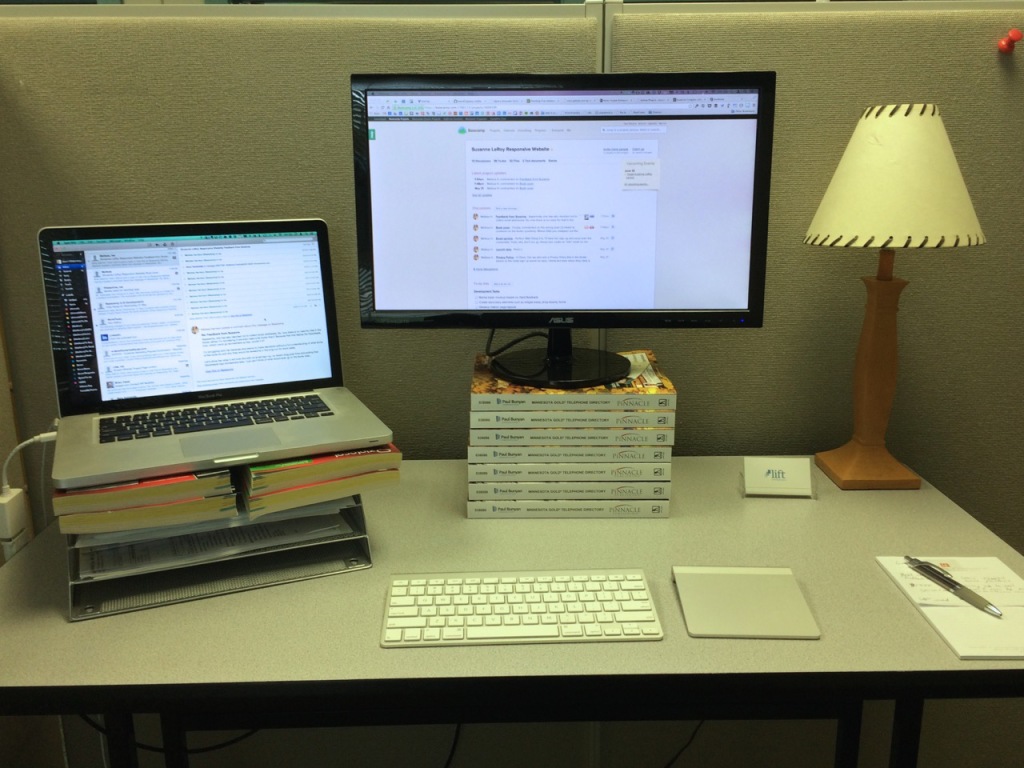 Immediately, I felt energized. I was standing. I felt active and alert. For some reason I naturally stand up and walk around when I talk on the phone, and this felt like an extension of that.

Of course, an hour later I was exhausted. Could I really do this all day?

After the first day, I got home from work and was pretty tired. My feet were killing me. However, I had heard that this was normal and that it gets better each day.

The next day I actually purchased a cheap foam anti-fatigue standing mat from Home Depot and that helped. After a few days, I had pretty much adapted to standing all day. Here it is: 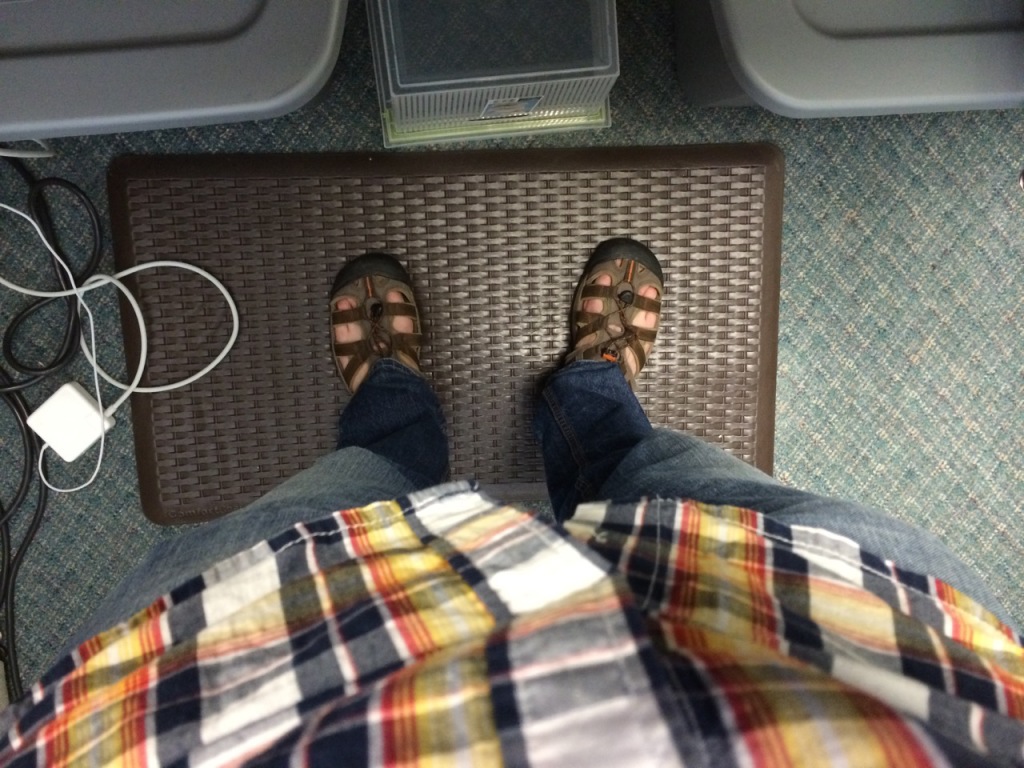 Once I was sure that I wanted to continue using a standing desk permanently, I quickly made another trip to Home Depot to get some lumber to build a permanent stand for my desk. The rubbermaid containers were getting ready to collapse under the weight of my desk (but they made a great temporary test).

All it took was four 2x4s, a box of screws, and some nail-on plastic feet so I’d be able to position it easily on the floor of my office. It doesn’t look amazing, but these standing desk risers are SOLID: 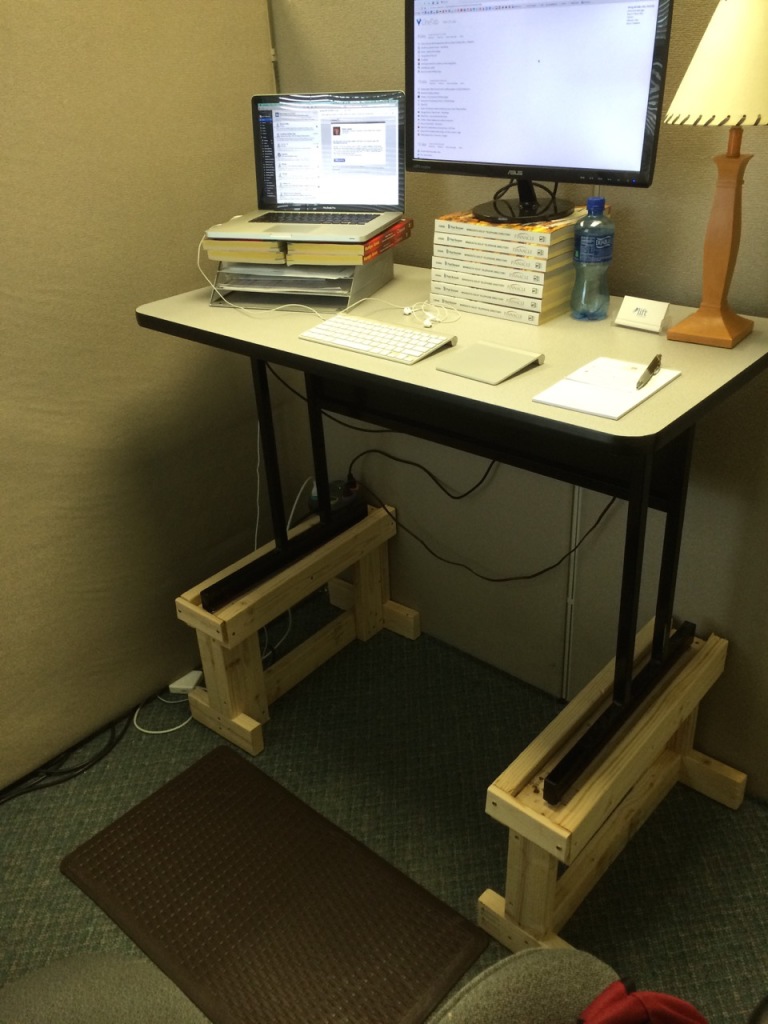 I also have a small plastic box I keep below my desk to put a foot up on in order to take the weight off each leg once in a while.

Like I mentioned, an anti-fatigue mat really seemed to help me adjust to standing.

After I initially tweeted about how I was enjoying the standing desk setup, a company called SmartCells tweeted back at me to make sure I had a quality anti-fatigue mat. I told them that I had picked up a cheap one from Home Depot. It turns out that the company tweeting me back happens to specialize in anti-fatigue mats. I then told them that I’d be happy to compare my cheap mat with one of theirs and then share my findings on my blog.

The mat they sent actually felt a little more firm than the one that I first bought, but was more of a heavy rubber material. Instead of foam, it uses a bunch of little “cells” to provide support. And whereas the foam mat would “bottom out” and hit a point where there wasn’t any cushiness left beneath my feet, the SmartCells mat always has a little more give in it, thus acting as a much more comfortable surface for standing.

I’ve since set aside the cheap mat and now use the SmartCells mat exclusively. It’s heavy duty and doesn’t slide around as easily as the cheap foam mat did, and it is super easy to clean as well. Hey, those morning peanut butter granola bars are messy!

So a huge “thank you” to SmartCells for sending the mat. I really see the value of a quality anti-fatigue standing surface. My legs and feet thank you as well.

(TIP: Even with the anti-fatigue mat, I now wear running shoes almost every day to save my feet. So if you’re in an environment where business attire is required, get a REALLY good mat.)

Overall, I’ve felt much more productive since making the switch. Whereas I’d previously get tired and lethargic while constantly sitting all day, I now feel much more proactive about what I’m doing. I find myself working in set “bursts” of quality time and then taking breaks to walk around, run errands, etc. between these bursts.

Another really nice side-effect of standing all day is that I find myself 1) drinking a ton more water and 2) having less of a desire to snack in the afternoons. I’ve been notorious for afternoon trips to Dairy Queen, and standing all day seems to have helped combat that. I don’t know why standing has had this effect on me, but I’ll take it.

I feel much more lively and energetic overall. Sure, I’ll still have a day where I am completely worn out, but my energy and desire to run or bike when I get home at the end of the day is definitely higher than it was previously. Maybe that’s due to the increase of water intake and decrease of S’mores Blizzards at DQ.

It doesn’t have to be all or nothing

To wrap this up, I’ll make a confession: I still sit down at work from time to time. I actually have two identical tables/desks at the office. One is now mounted as the standing desk, and the other remains situated directly on the floor. I don’t use it much, but when I do, here’s how it feels:

Yes, standing all day, anti-fatigue mat and all, can still wear me out pretty good. But in a good way. And some days at 3PM I might feel like I need a break. So I unplug my MacBook from my main monitor and walk over to the sitting desk. And it feels refreshing. Instantly I’m thankful for the break and I dive right back into working while sitting down.

The thing is, for that hour or two, working while sitting down is a treat. I don’t feel like I’m slowly dying. I’m just taking a load off after standing for six+ hours.

Tomorrow I’ll show up at 8AM ready to stand once again.